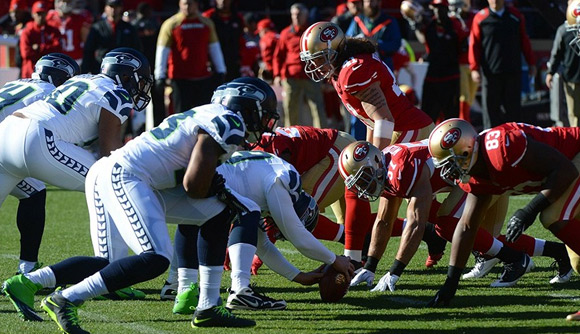 The NFL week will have the first meeting of a great rivalry in the NFC West, while offensive coordinator Todd Haley will return to Arrowhead Stadium to meet his old team, the Kansas City Chiefs.

The current NFC champions have dominated the series in recent years and have five wins in their last six games, including three in a row. The 49ers only victory in that period was in 2013 when they won 19-17 in the Bay. Seattle’s defense will have many changes this season, but expect them to maintain their good performances against the 49ers. Last season, the Legion of Boom only gave up 10 combined points in two games. Pete Carroll’s team is favorite in the NFL Odds to continue its dominance in the series listed at -1.5. The Seahawks are 4-1 SU and 5-0 ATS in the past five against San Francisco. The 49ers defense lost many elements in the preseason, so it will be very difficult to stop Seattle’s attack.

Player to watch: Running back Marshawn Lynch has 304 yards and two touchdowns in his last three games against San Francisco, who last season only allowed an average of 100.4 yards on the ground per game.

It will be the 31st meeting between these two traditional teams in the AFC, and the Steelers have the advantage in the series with 20 wins, including the last three clashes. The Chiefs last victory was in 2009 at home. It will be the third game of offensive coordinator Todd Haley against his former team, but it will be the first at Arrowhead Stadium. Kansas City is favorite in the NFL Odds to win this game at -1.0, but in the last five against the Steel Curtain is 1-4 SU and 3-2 ATS.

Player to watch: If the Chiefs want to end their losing streak against the Steelers running back Jamaal Charles should have a good performance. The bad news for the former player of Texas is that Pittsburgh only accepted an average of 100.8 rushing yards per game. Last year, Charles only once topped the 100 mark.

Few players remain on both teams of Super Bowl XLIV, but with quarterbacks Drew Brees and Andrew Luck on the field, the show at the Lucas Oil Dome is guaranteed. The Colts will host the Saints for the first time in eight years and will try to end a run of two consecutive defeats, including the Super Bowl in Miami. Indianapolis has the advantage in the NFL betting point spread rated -5.0 to win this game.

Player to watch: The secondary in New Orleans has been a weakness in recent years, which could be exposed to the talent of Andrew Luck. Former Stanford quarterback, who threw 40 touchdowns in 2014, will face the City of Jazz team for the first time in his career.

The first match of coach Todd Bowles against the Patriots will be difficult, as it will be in Foxborough where the Jets have failed to win in four straight years. New England has won seven of the last eight meetings in the series. Although New York improved defensively and will have great players in the secondary, Bill Belichick’s team is favorite in the betting Odds listed at -8.5. In the previous five games against the Jets, the Patriots are 4-1 SU and 1-4 ATS.

Player to watch: Defensive end Leonard Williams, who was the sixth overall pick in the last draft, will be in charge to pressure Tom Brady if they want to have a chance to win this game. The Pats offensive line allowed just 26 sacks in 2014.

At NflScheduleWeek7.com find your daily NFL week 7 game previews, and recaps of the 2015 NFL season.